Build out to solve housing shortage 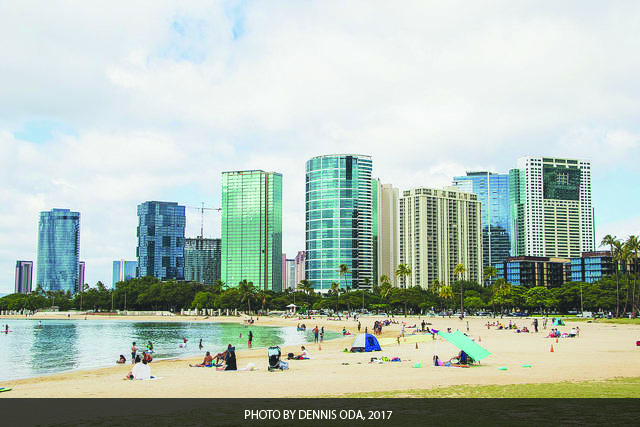 Build out to solve shortage

Column by Jaymes Song
As seen in the Honolulu Star-Advertiser on February 23, 2019

Honolulu keeps getting taller every year with new, shimmery condominium towers sprouting across town, changing the skyline and making the urban core more populated and denser.

Many thousands of new condo units have been built in the past decade, and thousands more are in the works for people seeking to live, work and play in town instead of spending hours commuting from other parts of Oahu.

Government leaders and urban planners in charge of overseeing everything from plans to height limits for these new high-rise condos have clearly embraced a build-up strategy to generate jobs and help solve the local housing crisis.

But has the “build up” really helped with housing affordability in high-priced Honolulu?

A new report says the build-up strategy is flawed and that affordable housing can be better achieved through a “build-out” strategy, which means constructing mostly single-family homes outside of the existing urban footprint.

Land-use expert Randal O’Toole, who wrote the report for the Grassroot Institute of Hawaii, suggests that housing in Hawaii can be made affordable only through the build-out strategy, mainly because land is cheaper outside of urban zones. Construction costs also are generally lower, compared with the mid- and high-rise housing projects built in urban areas. He blames artificial land scarcity for high Hawaii home prices.

“Nowhere in the United States, not even is there a physical shortage of land. But there are shortages of land for housing due to government regulation or ownership of lands that could potentially be used for housing, causing the undesirable affordability issues,” said the Grassroot report released this week. “The solution is to build out, not up.”

Keli‘i Akina, president of the nonprofit think tank, said one of the main reasons why residents leave is Hawaii’s lack of available homes and high housing costs, The housing crisis, in turn, is a result of state and county regulations that hinder reasonable residential development, he said.

“There’s more than enough land to satisfy Hawaii’s housing needs while protecting the environment and the beauty of nature,” Akina said in a statement. “Currently, Hawaii residents can develop homes on only 5 percent of Hawaii’s land mass. If we opened up just 1 or 2 percent more land, we could increase the supply and make homes more affordable.”

“It also promotes wealth inequality, transferring wealth from the poor to the rich, the young to the old, and from newcomers to existing homeowners,” he said in a statement. “Other effects include high costs of retail, commercial and other kinds of developments.”

But what about keeping the ? Some warn against the hidden costs of building out and say it’s actually cheaper in the long run and more environmentally friendly to build housing in urban areas.

The Canadian-based Smart Prosperity Institute, for example, said sprawl into fast-growing suburban areas is perpetuating a problem for municipalities, businesses taxpayers. The group said sprawl is one of the major contributors to air pollution because of more people commuting and also contributes to climate change, loss of farmland and nature, vehicle injuries and death, and risk of chronic disease.

“New suburbs cost city governments more than denser urban developments — for creating and maintaining roads, sewers, water, community centers, and libraries, and providing fire protection, policing, and school bussing,” the group said on its website. “The revenue collected from suburban developers and households rarely covers all the costs of the new infrastructure. Other taxpayers wind up picking up these costs.”

So, should we build up or build out?

“By focusing on building up, city officials are using the wrong tool to solve that problem,” the report said. “The right tool is to remove restrictions on rural development, allowing developers to build out, and restoring to rural landowners property rights that should never have been taken from them in the first place.”

O’Toole will discuss his report at a luncheon Monday, February 25, 2019, in Honolulu. The full report can be found on the Grassroot Institute of Hawaii’s website at grassrootinstitute.org.